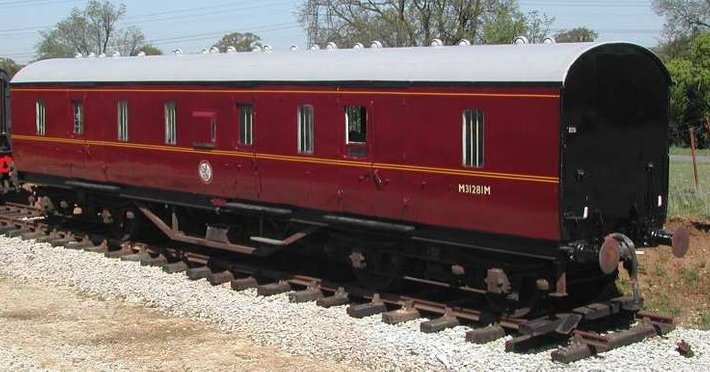 It became necessary for the Braintree Club to change premises in the early Eighties. A new home was found in the old Brewery Loft in Trinity Street in Halstead and although this was in very poor repair, it served both Clubs for more than 10 years. The sale of the club premises for development forced the now combined clubs to look elsewhere.

The time had come to take matters in to our own hands. We raised funds by trading second hand model railways until we had sufficient money to buy the vintage coach you see above. This was originally built in 1948 by the newly-nationalised British Railways to an existing London Midland & Scottish Railway design for express parcels vans. These were deployed as luggage vans, pigeon vans and eventually as postal sorting tenders. Indeed a vehicle like this one formed part of the Travelling Post Office train which was notoriously robbed at Seer Green by the Great Train Robbers. Under British Railways, these Corridor Full Brake vans, as they were known, were converted for the transportation of overnight newspapers and designated NPVs. When the NPV fleet became obsolete many were converted for use in Engineers Trains, some as stores vehicles, weed killing trains and breakdown train tool vans. This coach was withdrawn in 1982 and purchased out of traffic by the Colne Valley Railway for use as a mobile Machine Shop. In fact, it was not very mobile and languished for most of the time on one end of a siding.

When the Model Railway Club enquired about a possible space to bring their layouts from Halstead, the CVR management offered this vehicle. It had recently ceased its role as Machine Shop and had been cosmetically restored. A price was agreed and the coach migrated to a position in the yard. Much more internal and external restoration work had to be undertaken by the small band of volunteer MRC members. The entire ceiling had to be replaced with a boarded version. Several longitudinal timbers and two cross braces in the floor had to be replaced as they were rotten, the entire floor received new top floorboards and 90% of the side tongue and grove boarding (which had been missing) were replaced. Numerous other jobs were undertaken in order to prepare the vehicle for regular public opening.

We then purchased a modular building 42ft x 20ft to enable the club to extend and allow for more members.

The new building was not on the Colne Valley Railway but housed in Yeldham Transport Museum only two miles away. We stayed at the Museum for three years but we found that we had outgrown the building so a new building was sorced. The new building is an ex army accommodation block measuring 142ft x 42ft sited on the East Anglian Railway Museum at Chappel and Wakes Colne Station.

The museum wanted more classrooms so we decided that we would split the building in two leaving us with 70ft x 42ft. The building had to be completely refurbished and modelled to our needs (there are a few photographs in the gallery). We now have a permanent exibition room 20ft x 18ft with two layouts open to the public 364 days a year.

The other rooms are as follows:

Work is progressing well on the OO gauge club layout which is 60ft long incorporating the Gas Works OO9 and a Tramway linking the industrial end of the layout with the Town Center and main line station.

An O gauge club layout has three running lines, up and down main with passenger loop platforms in the station and a branch line with goods yard all capable of running both DC or DCC locomotives.

There are two permanent exhibition layouts on display for the public, the original club layout Lymeswold and Halstead, bequeathed to the club by Reg Down, one of our past members

If any of this appeals to you please use the contact form which can be found further on in the website or contact Gordon at, gordonhumphris@btinternet.com, the membership secretary, and leave a message with a contact number and  he will get back to you.